The paper reviewed here is ‘The Pathogenesis of Alzheimer’s Disease:A Reevaluation of the ‘Amyloid Cascade Hypothesis’ by R A Armstrong of Aston University, Birmingham. The article has a Creative Commons Attribution License and is freely available here. This is a relatively brief review article which asks the following questions

In the introduction, Armstrong draws the reader’s attention to paradoxes in the Amyloid Cascade Hypothesis noting for instance that the plaques and tangles are spatially and temporally distinct in Alzheimer’s Disease pathogenesis. Armstrong then goes on to describe the Amyloid Cascade Hypothesis outlining the critical evidence supporting the relationship of Beta Amyloid to plaque formation while also identifying the more tenuous links that have joined the plaque formation with that of the neurofibrillary tangles. 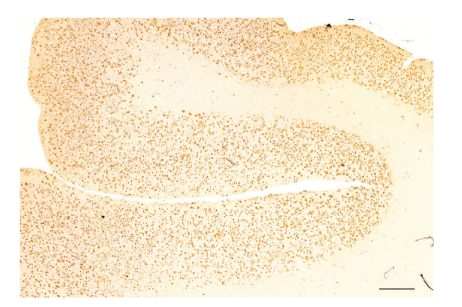 In the next section Armstrong then discusses criticisms of the Amyloid Cascade Hypothesis firstly considering evidence which characterises plaque formation as a physiological response (although this doesn’t necessarily preclude involvement in a subsequent pathological process) and reiterating the distinctions between plaques and tangles. On the basis of this discussion and further consideration of the evidence Armstrong proposes a revision of the Amyloid Cascade Hypothesis which is illustrated in the diagram below. 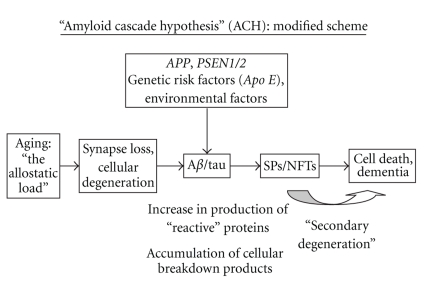 As I understand it, Armstrong is proposing that there are two stages of degeneration. In the first stage there are a number of types of brain injury that occur. These then trigger reactions (reactive processes) in the Beta Amyloid and tau which lead to secondary degeneration. Thus the plaques and tangles are not the primary drivers of degeneration and this explains a number of the apparent paradoxes in the original hypothesis. This is an elegant hypothesis further clarified by Armstrong’s subsequent remarks

‘First, the hypothesis predicts that significant signs of neuronal degeneration in AD should precede those of Aβ deposition and the effect of Aβ is secondary rather than primary in causing neurodegeneration. Second, it predicts that the pathogeneses of SPs and NFTs are not directly linked and the two lesions essentially arise independently’

Armstrong’s revised hypothesis is an important and elegant modification of the original hypothesis and if it holds true then it has significant implications for disease prevention and treatment. Given the large number of causes of primary degeneration it would mean that Alzheimer’s Disease diagnosis and treatment would become more complex and  multifaceted. The hypothesis can be tested both through novel research and a systematic analysis of the research literature.

The diagram is from the above article and can be found here.