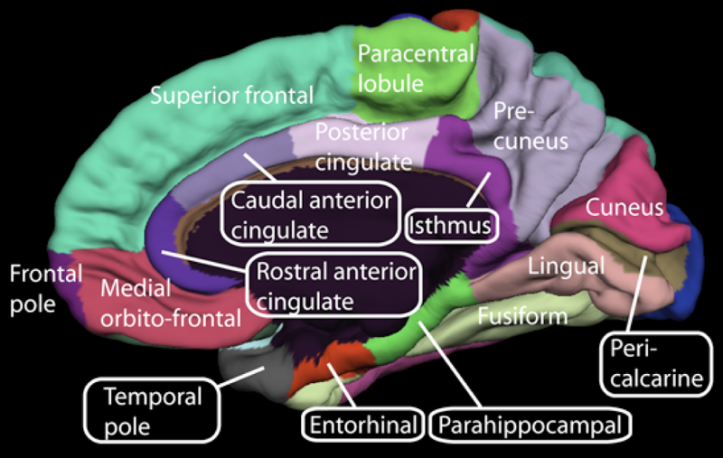 As part of a series on the Brodmann Areas, this is a brief overview of some of the literature on Brodmann Area 25 – the Anterior Cingulate Cortex (ACC).  The ACC is functionally and anatomically closely related to the Insular Cortex (see also reviews below on the Insular Cortex). The ACC contains a special type of cell called the Von Economo Neuron (see this review article). These cells also found in the Insular Cortex and are massively interconnected with cells throughout the brain and although present in other primates are significantly more abundant in humans (although obviously brain volume is correspondingly increased in humans). The ACC has been associated with psychophysiological functions including empathy, salience networks, performance on  reward related tasks, creativity and insight, meditation, risk assessment, brain-gut interactions, empathy for pain, the umami taste, interoception (along with the insular cortex) which is related to a number of the above functions, switching from automatic to controlled behaviours, and the placebo response. In pathology, the ACC has been associated with depression, dyspnoea, irritable bowel syndrome, pain, psychosis (and more specifically schizophrenia), autism, substance misuse, panic disorder (see also this review article), borderline personality disorder, obsessive-compulsive disorder, anorexia, Tourette Syndrome,  Fragile X syndrome and also with antisocial traits, The association with depression has been investigated in relation to social rejection. The reader may be impressed by the vast array of important physiological and pathophysiological associations of the ACC and there are two obvious implications. The first is that the ACC is a structure of profound biological importance and one which plays a role in many illness conditions as outlined above. The other possibility is that given the  interconnectivity of the ACC (possibly due to the Von Economo Neurons) it is active during many brain processes covering a variety of activities. In other words it may form a part of multiple brain networks distinguishing it from most other brain regions. Here the ACC can be conceptualised as a centre for transmitting interoceptive information to other brain regions for further processing. The research above as well as other studies in the field present a challenging question of just what the role of the ACC is and how it can be associated with so many different phenomenon.

An Investigation of D3 Receptors and Brodmann Area 1 in Schizophrenia

What does the Insular Cortex Do Again?

The Insular Cortex and Neuropsychiatric Disorders

Developing a Model of the Insular Cortex: A Recap

The Relationship of Blood Pressure to Subcortical Lesions

Interoception and the Insular Cortex

A Case of Neurogenic T-Wave Inversion

Video Presentations on a Model of the Insular Cortex

MR Visualisations of the Insula

The Subjective Experience of Pain*

How Do You Feel? Interoception: The Sense of the Physiological Condition of the Body

How Do You Feel – Now? The Anterior Insula and Human Awareness

Role of the Insular Cortex in the Modulation of Pain

The Insular Cortex and Frontotemporal Dementia

A Case of Infarct Connecting the Insular Cortex and the Heart

The Insular Cortex: Part of the Brain that Connects Smell and Taste?

Stuttered Swallowing and the Insular Cortex

Which Bit of the Brain Detects the Emotions in Speech?

Anatomy of the Hippocampus

Review: Involvement of BDNF in Age-Dependent Alterations in the Hippocampus

A Case of Pontine and Extrapontine Myelinolysis with Catatonia

A History of Human Brain Mapping

Brain Folding and the Size of the Human Cerebral Cortex