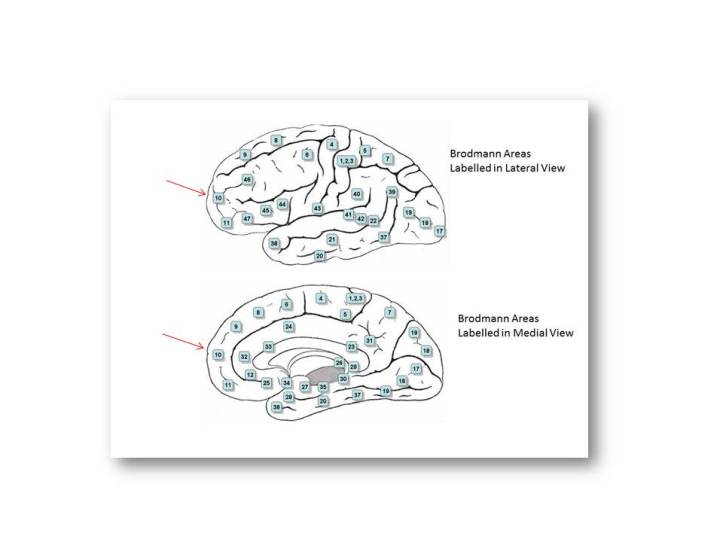 This is a brief overview of the research literature on Brodmann Area 10. A search was conducted on Medline using the search term “Brodmann Area 10” and the results analysed for relevance and then included in the review. Brodmann Area 10 (BA10) is also known as the Frontal pole cortex and is known to be involved in cognition and more specifically in goal formation. In one paper, the authors argue that the left BA10 is involved in integrating information in higher level cognitive processes (paper freely available here). There is a lot of research supporting a role for BA10 in memory. BA10 has been found to have a relationship with prospective memory in a number of studies.  In another fMRI study people with focal brain lesions were compared with controls and the researchers identified an association between lesions in BA10 and impaired performance on time-based prospective memory tasks (paper freely available here)(there is also related research showing prospective memory alterations in people with Schizophrenia linking two of the BA10 research areas). There are a number of other studies supporting a role for BA10 in prospective memory (see this freely available paper and also this paper). BA10 was active in the recognition stage of a spatial memory task in an event-related fMRI study (paper freely available here). In an event-related/PET study activity in BA10 was increased during episodic memory retrieval.

There is evidence for the involvement of BA10 in other high level cognitive processes including risk-taking and more complex motor tasks. In one fMRI study, increased activity was observed in BA10 when subjects were following contextualised instructions in contrast with self-directed activity. An EEG study identified consistent activity in an area thought to correspond to BA10 during participation of subjects in a game involving the Prisoner’s Dilemma. Activation in BA10 was associated with performance in a negotiating game between two people (paper freely available here). Activity in BA10 was increased during performance of a risk-taking task in this H(2)(15)0 PET study (paper freely available here). Using Stereo Electroencephalography researchers recorded cortical activity in BA10 in patients with epilepsy who were due to undergo surgery. The researchers found that during imitation of movements performed by another person there was increased activity in BA10 in the theta band compared with two other tasks. When subjects moved their hand in response to auditory stimuli there was increased activity in the Gamma band. BA10 was activated in subjects during ordering of sequences from daily activities of differing frequency (paper freely available here). The researchers found that different parts of BA10 were activated depending on the frequency of the daily activities. In an fMRI study, BA10 was found to be active 2 seconds after the end of examination and identification of the orientation of an object by touch alone (paper freely available here). Brodmann Area 10 is active during olfaction tasks as in this fMRI study.

A number of studies look more closely at the functional connections of BA10 with other brain regions as well as gene correlations with performance on a verbal fluency task. In a meta-analysis of activation peaks in fMRI studies, the rostral Prefrontal Cortex (BA10) was divided into medial and lateral portions. The medial rPFC was associated with coactivation in the Posterior Cingulate, Posterior Superior Temporal Sulcus and the Temporal Pole while the lateral rPFC was associated with coactivation in the Dorsal Anterior Cingulate, Dorsolateral Prefrontal Cortex, lateral Parietal Cortex and Anterior Insula. As might be expected, the coactivation patterns were strongly influenced by the tasks performed during scanning. BA10 was one of the areas in which correlated activity provided an explanation of activation of Occipital Cortex by an auditory stimulus and the researchers suggest this supports the existence of a synchronised network involving these regions (paper freely available here). In one fMRI study, activity in BA10 was correlated with the number of Val alleles in the COMT gene during a semantic verbal fluency task.

In a small post-mortem study of people who had Major Depressive Disorder researchers identified a reduction in the expression of three antiapoptotic genes in BA10. In an MRI-PET study of unmedicated patients with Major Depression Disorder (MDD) researchers found an increase in regional Cerebral Blood Flow in BA10 in people with MDD in comparison with the control group. Event related potentials were reduced in BA10 relative to controls in people with unmedicated MDD during performance in incongruent trials of the Stroop task (paper freely available here). In another event-related potentials study people with MDD manifested altered activity in BA10 relative to a control group 80 millseconds after committing an error on a Stroop Task and differentially recruited the Dorsolateral Prefrontal Cortex (DPFC) (paper freely available here). In another study there was found to be reduced expression of Protein Kinase subunits in BA10 in people who had been diagnosed with MDD. The protein kinases are involved in cell signals related to G-coupled receptors. Reduced activity in BA10 was observed in people with MDD in remission in another fMRI study in comparison with a control group. In a comparison of post-mortem gene expression in BA10 between people who had MDD and controls there was found to be an abundance of 5HT(2A) and a reduction in Protein Kinase A. Omega-3 fatty acid docosahexaenoic acid levels were reduced in BA10 in people with Bipolar Disorder compared to controls in one post-mortem study (paper freely available here).

There are a number of studies looking at BA10 in developmental conditions. In a study comparing people with learning disability of unclassified aetiology with controls and people with Down Syndrome, the first group were found to have increased cortical thickness in BA10. In an fMRI study (freely available here) investigating language processing in people with autism and controls, the latter group were found to have reduced BA10 activity in speaker incongruent sentences compared to speaker congruent sentences (i.e when the expression of the sentence matched the content e.g intonation). In another fMRI study (paper freely available here) people with Autism exhibited increased signal change in BA10 relative to a control group during performance of one executive task although this was not seen with another executive task and the researchers highlight the need to draw specific inferences on the basis of the type of executive tasks performed. In a PET study, there was found to be a reduction in regional Cerebral Blood Flow in BA10 in people with Obsessive Compulsive Disorder who had responded to behavioural therapy versus non-responders. Childhood and Adolescent pseudohypoacusis was associated with increased grey matter volume in BA10 in a small MRI study. In Children and Adolescents with conduct disturbances and other traits were found to have reduced activity in BA10 during a reversal learning task in comparison with a control group and children and adolescents with Attention Deficit/Hyperactivity Disorder alone (paper freely available here). Antineuronal antibody profiles in BA10 did not differentiate children with Tourettes and PANDAS from controls in this study. Cerebral glucose utilisation was decreased in BA10 in people with Congenital Scoliosis in comparison with controls in this PET study (paper freely available here).

BA10 has also been investigated in relation to aging, hypoxia and a number of neurological conditions. In an electromagnetic tomography study exposure to hypoxia was associated with increased activity in BA10.  Aging was associated with reduced Polyunsaturated Fatty Acid (PUFA) levels in BA10 in a Post-Mortem study using Gas Chromatography (paper freely available here). BA10 was one of the areas  in which grey matter reduction was identified in people with Fascioscapulohumeral Dystrophy relative to a control group in this MRI study. BA10 was one of the areas in which there was reduced regional Cerebral Blood Flow relative to controls in people with Amyotrophic Lateral Sclerosis who scored within the population reference range on a verbal fluency task in this PET study. In an electrotomographic study event-related activity in people with insomnia was reduced during task performance in BA10 amongst other areas and the people with insomnia needed more trials to learn a selective memory task (paper freely available here).

Thus there is a relatively large research evidence base identifying the structural and functional characteristics of BA10 in different populations and across research paradigms. Many of the studies are of small sample size but nevertheless inform hypotheses for further work in this area. A number of studies suggest a role for BA10 in higher cognitive processes particularly memory. This forms a theoretical basis for investigating BA10’s putative role in a number of illnesses/conditions as can be seen from the studies above.

An Investigation of D3 Receptors and Brodmann Area 1 in Schizophrenia

What does the Insular Cortex Do Again?

The Insular Cortex and Neuropsychiatric Disorders

Developing a Model of the Insular Cortex: A Recap

The Relationship of Blood Pressure to Subcortical Lesions

Interoception and the Insular Cortex

A Case of Neurogenic T-Wave Inversion

Video Presentations on a Model of the Insular Cortex

MR Visualisations of the Insula

The Subjective Experience of Pain*

How Do You Feel? Interoception: The Sense of the Physiological Condition of the Body

How Do You Feel – Now? The Anterior Insula and Human Awareness

Role of the Insular Cortex in the Modulation of Pain

The Insular Cortex and Frontotemporal Dementia

A Case of Infarct Connecting the Insular Cortex and the Heart

The Insular Cortex: Part of the Brain that Connects Smell and Taste?

Stuttered Swallowing and the Insular Cortex

Which Bit of the Brain Detects the Emotions in Speech?

Anatomy of the Hippocampus

Review: Involvement of BDNF in Age-Dependent Alterations in the Hippocampus

A Case of Pontine and Extrapontine Myelinolysis with Catatonia

A History of Human Brain Mapping

Brain Folding and the Size of the Human Cerebral Cortex