Brodmann Area 21: A Brief Review of the Literature 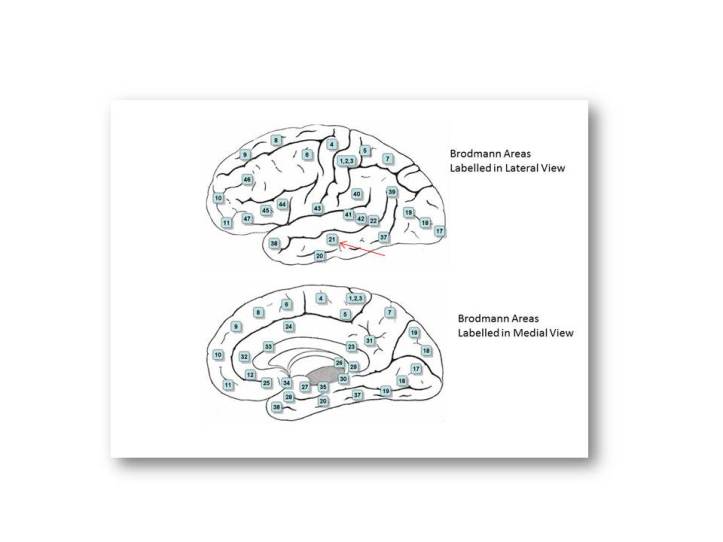 A brief review of the literature on Brodmann Area 21 (BA21) was conducted on Medline using the search term “Brodmann Area 21”. Relevant papers were identified from the returned abstracts. The search returned 123 results. Brodmann Area 21 (BA21) is part of the Temporal Cortex and is known also as the Middle Temporal Area 21 although in at least one study it is described as part of the Insular Cortex. Broadly speaking the research can be divided into studies investigating physiological parameters and those investigating characteristics of BA21 in pathological conditions.

In one fMRI study, children who were homozygous for the T allele in rs4675890 near the CREB1 gene (there is evidence of an association between CREB1 and mood disorders) showed a different pattern of neural activity to children who were homozygous for the C allele. In the former group there was significantly greater BOLD activity in BA21 amongst other differences. Amongst other areas there was found to be a decrease in alpha-2, beta-1 and gamma activities in BA21 15 minutes after exercise in this electrotomography study involving 22 runners. Differential patterns of 3[H] Nicotine-binding were found in BA21 in this Autoradiographic study. In a post-mortem grey matter analysis of 3 areas including BA21 in 51 brains there was found to be a reduction in 5-HT1A and 5-HT2A receptors in these areas compared to a control group amongst other findings. The researchers in this study compared the cytoarchitecture of the Hippocampus and Temporal Lobe and found a number of differences. In an fMRI study, sleep deprived subjects showed compensatory responses in BA21 amongst several other areas (paper freely available here).

The C-allele of a GSK3-beta promoter single-nucleotide polymorphism (rs334558) was associated with increased grey matter volume in BA21 in people with schizophrenia in this study. Activity in the posterior part of the right BA21 was associated with the number of complex sentences in a control group compared with people with schizophrenia in this fMRI study (paper freely available here). Compared to a control group, people with Schizophrenia were found to have altered cortical electrical activity in the left BA21 amongst other areas in this 123-channel EEG and current density reconstruction study. In a post-mortem study [3H]SCH23390 bindings were used to examine Dopamine-1 like receptors in people who had been diagnosed with Schizophrenia. The researchers found an increase in the receptors in BA21. People with depression exhibited reduced activity in the right BA21 compared to controls whilst performing the Tower of London task in this 99mTc-ethyl cysteinate dimer SPECT study. In an fMRI study of girls (age range 8-10) bilateral activity in several regions including BA21 was associated with sad feelings experienced when watching sad films.

In a replication of an important neuroimaging study of stuttering, researchers used Positron Emission Tomography to investigate stuttering. They found an inverse correlation between cerebral blood flow in BA21 and stuttering and in conjunction with their other findings they concluded that stuttering resulted from an alteration in the communication between the auditory and speech-motor areas. In a PET study involving right-handed stutterers and 10 right-handed controls, researchers identified negative regional Cerebral Blood Flow correlates of stuttering in the Right BA21 in female stutterers (more broadly speaking the researchers found bilateral associations with stuttering in female speakers and right sided associations in male stutterers).  In an fMRI study, people with a diagnosis of Borderline Personality Disorder read a dissociation-inducing script as well as a neutral script. The former script was associated with reduced activity in the right BA21 amongst other differences. In an fMRI study of people with temporal lobe epilepsy and a control group, an auditory language task activated contralateral Right BA21. BA21 grey matter volume reductions were found in people with panic disorder compared to a control group in this structural MRI study. In a SPECT study people with Wilson’s disease were found to have diffuse/focal hypoperfusion in BA21 amongst other areas. Researchers found reduced perfusion in BA21 amongst other areas in people with REM sleep behaviour disorder compared to a control group in this (99m)Tc-Ethylene Cysteinate Dimer (ECD) SPECT study. In people with refractory angina, stimulation of the spinal cord was associated with decreased regional Cerebral Blood Flow was noticed in BA21 amongst other areas in this PET study.