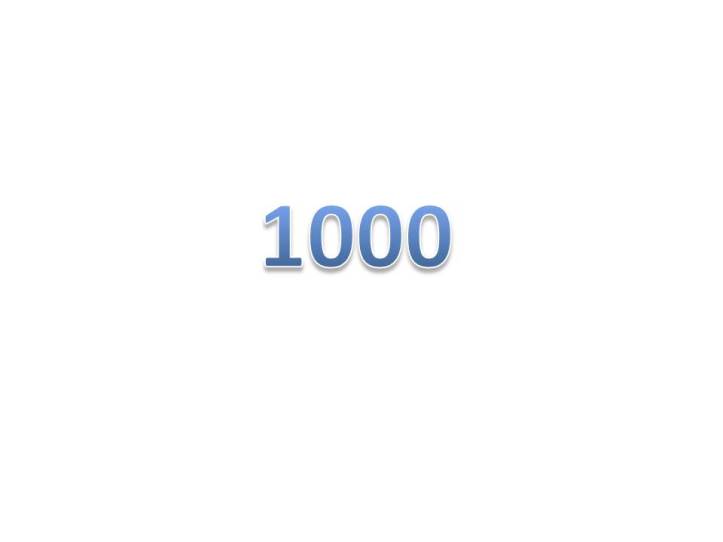 I’ve reached the 1000th post on ‘The Amazing World of Psychiatry Blog’. When I originally started the Blog on 16th July 2008, i’d started it on Blogspot which was a great place to start. For reasons I can no longer remember though I soon ported it to WordPress. WordPress and Google as well as many other providers offer a free service for setting up Blogs which include many powerful and intuitive features that can get a beginner up and running very quickly. Wanting to veer away from a focus on opinion I started to review academic topics relevant to Psychiatry and there was an almost endless supply of source material for the posts. A weekly cycle of podcast reviews, biological, psychological and social psychiatry articles, news round-ups, book reviews and blog reviews provided a structure to the writing. My thoughts on blogging were further structured by a piece that I published on the Priory.Com site. To some extent the Blog is limited in the ability to discussion of certain elements of Psychiatry. Due to obvious obligations expected of doctors I don’t write about my own clinical experiences. Furthermore the public nature of the Blog places limitations on what I write about and how I write about subjects although I am careful to note that I represent myself and not any body, organisation or even the profession. I hope to convey in my writings some of the fascination that Psychiatry holds for me and the benefits that it can bring to society. Whilst some may be disconcerted by the title there is an important distinction between serious mental illnesses and the systematic effort to treat such illnesses and to bring realistic hope. While I am a Psychiatrist and best placed to write about this, Psychiatrists work within a wider multidisciplinary team and patients (or people) get better only through the talents and efforts of the multidisciplinary team. In reviewing Blogs relevant to this field I have been keen to review Blogs by members of other professions who give invaluable insights into their work and the interested reader will find evidence of this in my limited attempt to curate a small part of the vastness of the internet.

Early in my writings, I’m sure I would have slightly irritated some readers by my admittedly eccentric interest in Neanderthals (see Appendix in this article for a full list of Blog posts). Why in a Blog which purports to focus on Psychiatry should the author write about such an obscure topic as the ‘brutish’ Neanderthal caveman? Well the answer to this question is Charles Darwin, one of the greatest scientific geniuses in history who continued the work of his grandfather Erasmus Darwin to lay his groundbreaking theory on the Origin of Species. Since Psychiatry is a branch of Medicine and Medicine is a branch of Science then it follows to maintain consistency that Psychiatry should optimally operate within a comprehensive scientific world view. To ignore the findings of another branch of science where relevant is I believe to constrain the ability of Psychiatry to deliver comprehensive models of illnesses and treatments. These may not be relevant to contemporary models but in the longer term would lay the foundations necessary for understanding health and illness in a more profound way. Evolutionary Psychology and Evolutionary Psychiatry are young disciplines still finding their feet but it is my belief that one day they may facilitate the creation of a scientific language necessary to link the many scientific disciplines which are of relevance to Psychiatry. Returning to the subject of the Neanderthal, I have been particularly fascinated by three important features of this hominid species. Firstly it has been shown beyond any reasonable doubt that after diverging from our ancestors some 300,000 years ago, Neanderthals have interbred with our human ancestors and their genetic legacy is still to be found encoded in our DNA to this very day. The second feature of Neanderthals is that they have a cranial capacity much larger on average than modern humans and endocasts suggest that the Neanderthal brains had many interesting characteristics. The third feature of Neanderthals is that they have dominated a good portion of the world for a staggeringly long time – hundreds of thousands of years – long before humans existed and they have done so with sophisticated cultures and technologies. This also is beyond reasonable doubt and ranges from the use of Red Ochre through to highly efficient stone tools and various adaptations to the harsh environments of the Ice Ages. Current studies by anthropologists and geneticists are returning remarkable results which can help us to reflect on our shared identity in a profound way. Whilst this may not be intuitive, it is again an inexorable result of an expanding scientific world view supported by the facts and this newly emerging data is challenging mainstream narratives.

My interest in Evolutionary Psychiatry has also sparked my interest in some amateur field work filming primates around the world and I have placed the results on YouTube for the interested reader to inspect and interpret for themselves. Many of my observations have been concerned with the way in which primates have interact socially and I have produced resulting videos and articles (see here, here, here, here, here, here and here) which will no doubt annoy those with an aversiveness towards Evolutionary Psychology and Psychiatry being as they are qualitative descriptions of observations of limited sample size. However the purpose of such videos and articles is not to demonstrate a truth about the world. The correct way to do this is to publish in a peer-reviewed journal with an adequately designed study. Instead the purpose is to stimulate a discussion or debate. That perhaps is the strength of a Blog. Below are stills from some of the footage I took last year.

These observations have also given me a lot of ideas and allowed me to draw some simple generalisations about cognitive and behavioural correlates of different Primates although Primatologists have done an incredible amount of sophisticated work in this area.  I have also been pleased to have filmed all of the greater ape species as well as much rarer species such as the Nilgiri Langurs and to have had a lot of fun while doing so.

YouTube has provided me with an interesting medium for developing the work i’m doing on the Blog. I started off the YouTube channel by creating a video about a model of the Insular Cortex that i’ve been developing. Scientists such as A (Bud) Craig and Antonio Damasio however have already done a lot of work in this area and have laid the foundations for a very impressive model of the role of the Insular Cortex in the generation and regulation of emotions. The footage of Primates has found a natural sanctuary on the YouTube channel. I have also been a little distracted by the slow motion footage feature on my camcorder which gave me an excuse to ask some questions about visual processing and possibly to confuse some viewers of my YouTube channel. However the smart people at YouTube have been busy working on new ways to help YouTube producers create movies and some of these developments have opened up new ways of communicating science and psychiatry. Twitter and Friendfeed accounts have helped me to explore social media in more detail and to find new ways of keeping up-to-date with developments in fields of interest. Other themes I have been writing about on the blog include the Science 2.0 movement, Positive Psychology and Wellbeing. My main interest however is in Mild Cognitive Impairment and Dementia and here the posts have been slightly more technical and perhaps at times less accessible to the general reader. Finally in order to help make sense of the blog i’ve createed an index of all of the articles on the blog here.