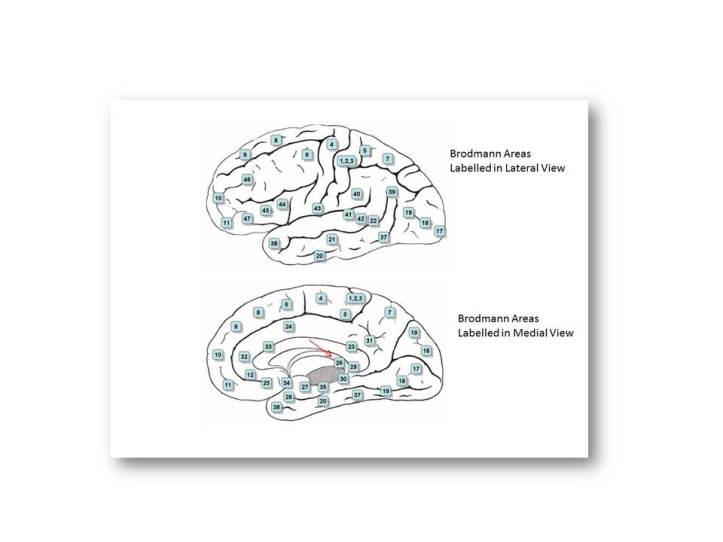 The brain is a complex structure and but can be organised according to several principles. One approach is to characterise the brain regions according to the microscopic properties of these regions.  More specifically the neurons are organised differently between regions. Some regions may contain unique types of neurons. This approach to understanding the organisation of the brain was proposed by the German Neuropathologist Korbinian Brodmann and resulted in the eponymously named Brodmann Area. There are 52 areas in all and I have covered other Brodmann Areas elsewhere.

One region in particular Brodmann Area 26 (BA26) is very interesting as I could find few studies on this area. I undertook a search on Medline (via PubMed) using the search term ‘Brodmann Area 26′ and found 30 references which revealed 2 relevant studies after excluding papers which were irrelevant (e.g one abstract for instance referred to ’26 subjects’ and Brodmann Area elsewhere causing the search engine to identify this as relevant). So in the end there were 2 studies. The experienced neuroscientist might be asking why not use the Retrosplenial Cortex as a search term instead. BA26 is classed as Retrosplenial Cortex (RSC) but is a subset of the RSC and that’s where the problem is. This series is on the Brodmann Areas and how we can understand the brain by strictly adhering to these areas in answering questions about the brain. Studies that use the RSC don’t necessarily constrain their answers to BA26. As an example look at this study. Although examining the functional connectivity of the RSC, a close examination of the paper reveals that BA26 is not included within the remit of the RSC (although it does include BA29 for instance). So in summary by constraining the search to Brodmann Area 26, a limited  number of papers are identified but that is necessary given the aims of the search.

#1 Triggering Traumatic Memories in People With PTSD Reduces Activation in BA26. This Positron Emission Tomography (PET) study involved people who had been exposed to trauma in recent war zones and were experiencing Post-Traumatic Stress Disorder. The researchers found that when traumatic memories were experiences through stimuli there was a reduction in blood flow to BA26. In PET studies, it is assumed that the changes in blood flow detected by the PET scan represent changes in activity in the brain. The researchers used (15)Oxygen water to investigate regional cerebral blood flow (rCBF). What the researchers also found was in increase in activity in several areas including the motor cortex which they interpreted to mean that the person was readying for motor action in response to the stressful stimulus.