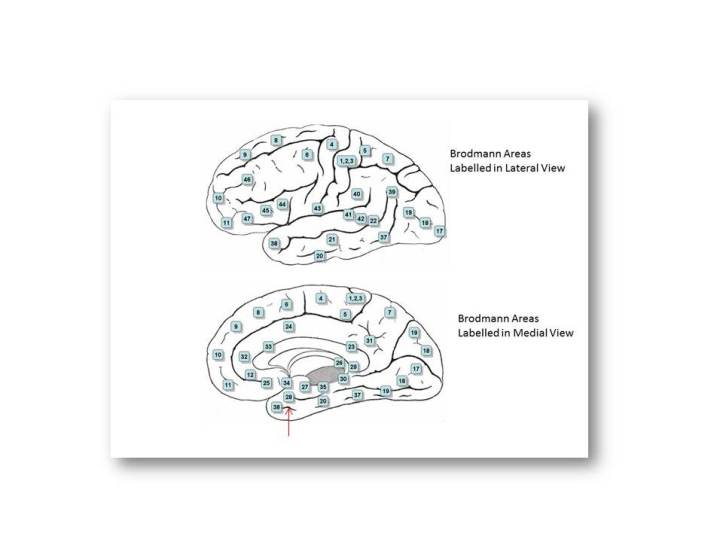 The brain is a complex structure but can be organised according to several principles. One approach is to characterise the brain regions according to the microscopic properties of these regions.  More specifically the neurons are organised differently between regions. Some regions may contain unique types of neurons. This approach to understanding the organisation of the brain was proposed by the German Neuropathologist Korbinian Brodmann and resulted in the eponymously named Brodmann Areas. There are 52 areas in all and I have covered other Brodmann Areas elsewhere. Like Brodmann Area 27, Brodmann Area 28 (BA28)  does not appear to be a popular term in the research literature. Researchers much prefer to use the term Entorhinal Cortex and the research is more likely to be located using this term in Medline.

I undertook a brief literature search on Medline using the term “Brodmann Area 28” which retrieved 43 results. After a cursory examination of the abstracts there were 5 papers that were relevant. Due caution should be taken in interpreting these results as the Brodmann Area search term will return a restricted and selective part of the literature. The five papers were as follows

#1 In a post-mortem study, neurons in BA28 with a certain type of filament SM132 were reduced in people with Alzheimer’s Disease compared to controls (paper freely available here). SM132 is a non-phosphorylated neurofilament protein. Neurons containing this protein are known to be reduced in Alzheimer’s Disease from other studies. The researchers here compared the brains of people who had been diagnosed with Alzheimer’s Disease with a control group and confirmed the reduction in SM132 neurons whilst also identifying an association with Neurofibrillary Tangles (NFTs) and cells which stained positive for antibody against Tau protein. This again confirmed previous findings and suggested that a causal relationship may be worth investigating. Interestingly a quick search of Medline didn’t reveal any subsequent studies of interest at the time of writing (using “SM132” as the search term).

#3 BA28 is one of the areas that shows a difference in activity in people with Parkinson’s Disease who when administered Levodopa, if those people’s mood fluctuates when receiving Levodopa (compared to people whose mood does not fluctuate when administered Levodopa) (paper freely availabe here). This conclusion needs a bit of qualifying. Positron Emission Tomography enables researchers to monitor regional Cerebral Blood Flow in the brain. The assumption is that if a brain area is active, that it requires more energy and will therefore receive more blood flow after the activity. Therefore looking at cerebral blood flow changes is a proxy for monitoring cerebral activity. People with Parkinson’s Disease can receive a Dopamine based treatment called Levodopa. Furthermore some people will experience mood changes when they receive the Levodopa. The researchers were interested in finding out why this happened. They compared those who did experience mood changes with those who didn’t and looked to see what happened when they were administered Levodopa. They found that there were differences in activity in several regions including BA28. The conclusion is that this area with a key role in memory formation may be worth investigating for a role in Levodopa associated mood changes in Parkinson’s Disease.

#4 In the Temporal Cortex, BA28 is the area which shows the highest number of binding sites for two antidepressants – Imipramine and Paroxetine. In one study, the researchers looked at the uptake of [3H]Imipramine and [3H]Paroxetine in the brain, both of which are ligands for the Serotonin receptor. They found that in the Temporal Cortex the greatest uptake (indicated by the maximum number of binding sites or Bmax) of both antidepressants was in BA28 indicating a high number of Serotonin receptors in this area.

#5 Changes in activity in BA28 during a learning task correspond to success on subsequent testing. The researchers in this fMRI study imaged 6 healthy volunteers during a learning task which involved visually presented words. The researchers found a slowly changing activity in BA28 during the learning task which didn’t correlate with the rate of word presentation but did correlate with success on subsequent testing (which involved presentation of cues to help people remember what they had seen). This suggests that BA28 activity is in some way related to how well material is remembered. However due to subtleties in how information is stored and the very small or even negligible changes that occur fMRI may not even be able to detect the subtle learning associated changes. This is a small study which did detect some changes but would benefit from larger replication studies.