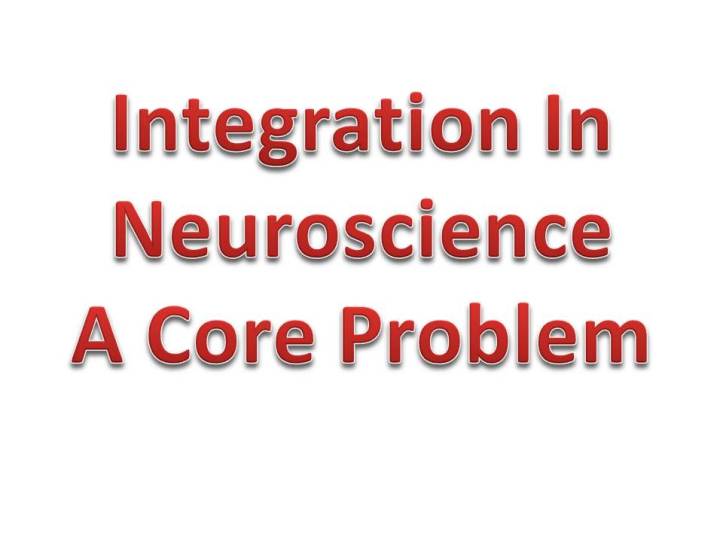 In the first part of this series on integration in Neuroscience, I looked briefly at the place of language in solving the core difficulties addressed here. Language however is only part of the solution. Let us consider an area of investigation within neuroscience – the emotions. There have been various investigations of the emotions. Attempts at a taxonomy of emotions have led to difficulties. There are many words used to describe emotions. Many of these words refer to the same emotions or there is at least overlap. Simple emotions such as sadness, anxiety, happiness and anger are universally understood. For these emotions it is much easier to build a theoretical framework around. An understanding of these emotions is used to create practical applications. If we accept a simple and uncontroversial definition of sadness then we may use this in the construction of an assessment scale. This assessment scale can then be used to assess interventions for treating sadness (I will distinguish here between sadness and clinical depression). This may solve practical problems and for some there may be no need to delve further.

However the distinction between sadness and despondency, heartache, dysphoria, dejection and sorrow is altogether more complex. Some of these terms are commonly used in the English language although some of these terms will have clinical implications for professionals that do not necessarily exist in lay usage. Thus we are faced with the problem of which community the word is used within and the meaning the word has within that community. For a study of the emotions this is inescapable. Emotions are a good example of the limitations of language because emotions are such a private experience. Nowhere can we be less sure that the word labels we are using reflect a common emotional experience. If we talk about centimetres then it is easy enough. One person produces a ruler. Another person produces a ruler. They each draw up a centimetre on a piece of paper using the ruler and compare their results. How simple it seems to have such a precise meaning attached to a word.

Let us call this property the ‘replicability’ of a word. By this I mean that a replicable word is one in which I can demonstrate in the external world that my private understanding of the word has the same meaning as your private understanding of the word. Let us also say that in the case of the word ‘centimetre’ the replicability of the word is 1 as two people can be satisfied on the basis of their reasoning and this designated experience that their meanings are equivalent. When we consider emotions in a straightforward way the ‘replicability’ of the word is much less. Whilst it does not approach zero it is much less than 1.

If you and I are in a discussion and we contest the meaning of the word happiness then we may triangulate the meaning of the word by reference to experience. If you tell me a story in which a person is particularly fortunate I might expect the person to be happy. If you say that in this instance the person is very happy this counts as part of our shared experience. As a result I can be reasonably confident that if I anticipated the person would be happy and you told me that the person was happy then we were both thinking along the same lines. Unconsciously this is evidence that we have a shared meaning of the word. In crude terms although it is not 1 in terms of ‘replicability’ it is certainly not zero.

We do this all the time and no doubt this accounts for part of our initial development of language. This is an application of the so-called ‘theory of mind’ where we can say that understanding language is based on an understanding of other people’s mental states and anticipation of what they would be thinking. If we did not have this then surely our language would develop idiosyncratically. If we think long and hard enough about certain phenomenon such as emotions and delve ever deeper, we move further away from the lay usage and need to develop new specialised terms. The more specialised these terms are the smaller is the community in which they are shared**.

In the field of study of emotions there have been various approaches which have attempted to translate private emotional experiences into an external measurement. For instance on an MRI scan, how much of one part of the brain lights up when a certain emotional experience is described. The measurements can be quite precise within the fMRI scanner or the EEG or the EMG correlates. At first glance, the replicability of the word must surely head quickly up to 1. However the use of neurophysiological measurements is very effective for neurophysiology but we are still trying to understand the domain of phenomenology – the inner experiences of a person. Regardless of the neurophysiological responses can we be certain that the private experiences of the researcher and the research subject are the same when a certain emotional word is used?

If we look at 100 pairs of people describing to each other the word centimetre then we would almost certainly the find the word centimetre to have a replicability of 1. However what would happen if we did the same for 100 pairs of researchers and research subjects with regards to the word ‘sombre’? We would probably not reach 0 but it may be in the middle and would depend on the methods that were used to triangulate the shared experience. Language in this case has limitations. Perhaps it is in reaching the limitations of language itself that we begin to understand the core problems that face neuroscience.

* we can throw up various barriers by saying for instance that this third person had told you that they were happy thus negating the need for you to infer their emotional state. In practical terms this argument is nullified if the person did not indicate their happiness other than through non-verbal communications. After all, very rarely will a person simply state they are happy – they will express it and it will be left for us to infer what is considered an ‘obvious’ emotional state.

Do We Need A Crisis in Science For A Revolution to Occur? – An Interpretation of Scientific Revolutions – Part 8

What is the Effect of a Scientific Crisis in Neuroscience? An Interpretation of Scientific Revolutions – Part 9

What Would An Accurate Historical Narrative of Neuroscience Look Like? An Interpretation of Scientific Revolutions – Part 12

Is Criticism Within Neuroscience Sufficient for a Revolution? An Interpretation of Scientific Revolutions – Part 13

Is A Historical Narrative Central to the Development of Neuroscience? An Interpretation of Scientific Revolutions – Part 14