Have Scientists Discovered the Seats of Conscious and Unconscious Experience?

The Society for Neuroscience conference featured a remarkable announcement from one research group in Japan. Kamitani and colleagues undertook research in which they looked at 3 subjects who were dreaming. They used functional Magnetic Resonance Imaging and Electroencephalography – two techniques that investigate activity in the brain (see explanations in videos below).

Although the study has yet to be published in a peer reviewed journal the researchers reported that they had predicted the content of the dreams of their subjects. This followed from previous research where they had looked at brain regions involved in the early stages of visual processing. The researchers had achieved similar results with these brain regions. This part of the brain is known as the Occipital Cortex. Brain regions involved in early visual processing including Brodmann Areas 17, 18 and 19 (The areas were originally described by the German Neurologist Dr Brodmann after a detailed microscopic examination of the brains of several species including humans).  Brodmann Areas 17, 18 and 19 and are displayed in the diagrams below. 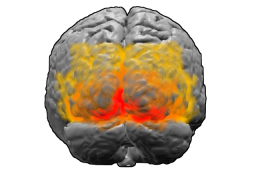 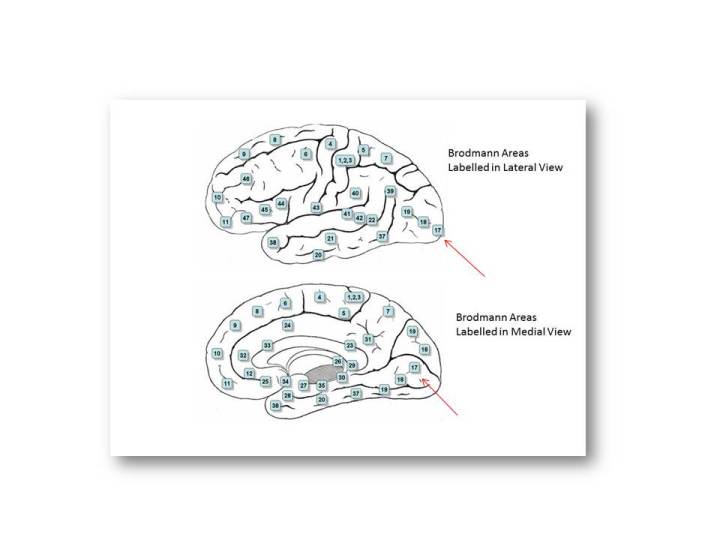 However for this new study, the researchers looked at two additional parts of the brain which are considered to be areas for higher visual processing. The first was the Parahippocampal Area in the Parahippocampal Gyrus. This area is thought to play a role in identifying places.

Another area they looked at was the Fusiform Face Area located in the Fusiform Gyrus. As the name suggests, this area is thought to play a role in face recognition although this interpretation is not without controversy.

At this stage it is worth mentioning a previous study by Gallant and colleagues. These researchers reverse engineered video sequences from the brain activity of subjects that had been studied quite intensively. I won’t elaborate on the details here as I have covered this elsewhere (see Appendix – ‘Turning Visual Experiences into a Movie’). This study showed quite convincingly that it is possible to use fMRI data in conjunction with video footage to reverse engineer what the visual cortex is processing. Below is a sequence that was produced on the basis of the recorded brain activity in conjunction with previously seen footage to reverse engineer novel footage. You can judge for yourselves how successful they were.

However this was another study. Returning to the results reported by Kamitani and colleagues, the researchers report that they have used the Parahippocampal Gyrus and Fusiform Gyrus activity as well as parts of the visual cortex to predict dream content. If this is so then it implies that they have found significant neuroanatomical correlates of dreams. Elsewhere I have looked at the significance of these types of results in Neuroscience. Freud in his work ‘The Interpretation of Dreams’ (see review here and also Appendix) wrote about dreams as the gateway into the unconscious mind.  Francis Crick, co-discoverer of the structure of the DNA double helix went on in his later years to investigate consciousness. He looked in particular at visual consciousness and how this was represented in the visual cortex.

So, is it possible for us to see unconscious and conscious experiences. Regardless of how exciting these findings are we are unfortunately faced with a difficult problem. If higher and lower areas of visual processing are mapped and correlate with dream content it does not mean that the unconscious mind has been fully mapped. These areas map to other areas in a sequential manner. There are many association cortices. In a brain which operates through both parallel and series processing, consciousness may be represented in circuits within the brain. For instance there may be several other areas where similar predictions about dream content could be made. In theory it is possible to look at the fMRI activity throughout the brain and exclude regions of interest that bear no significant correlation with dream content. Then it might be possible to say with a reasonable degree of confidence that the unconscious experience is limited to those areas showing a significant correlation.

In the dream state we may have the most unusual dream experiences which bear no relation to the events of the day. There is often a narrative which is testimony to the genius of the unconscious mind, one which is able to generate rich visual and auditory experiences in real time and to guide them with a narrative of sorts. Freud wrote about the way in which the mind would use different techniques to engage with the ego without producing too much anxiety. These are the remarkable aspects of dreams. Perhaps what the researchers have found here are the more mechanical, narrative-independent aspects of creating the visual fabric of dreams. However it is the narrative content, the meaning that is the richest aspect of our dreams. Here we are still left with questions to be answered and ones that are more difficult to answer as visual experiences are more accessible to studies of this type.

The same applies to the question of visual consciousness. If we can make predictions about what type of activity the visual cortex is engaging in, how it correlates with what the person is experiencing, it still does not tell us about whether the visual experience – visual consciousness is occurring upstream or not. Nevertheless as investigations expand to include more areas, researchers will surely reach a point where they have included the areas of conscious experience in their analysis and used this in making their predictions.

Appendix – Related Resources on this Site

Turning a Person’s Visual Experiences Into A Movie