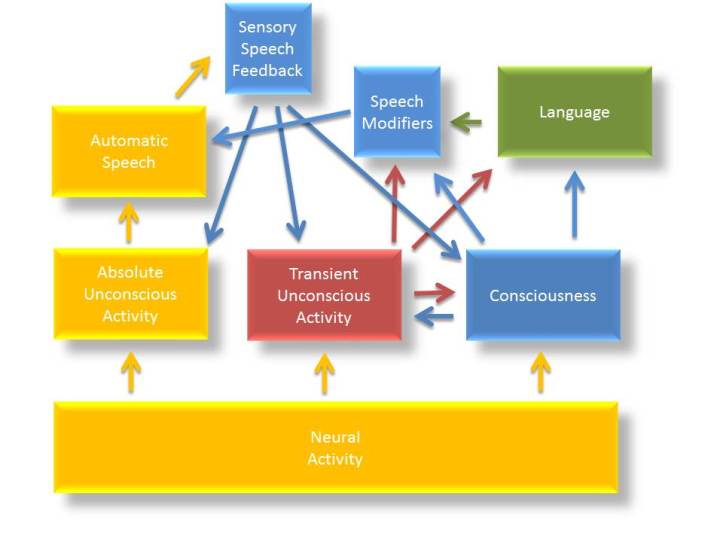 In the previous post, we looked more closely at automatic speech with some video examples. Just returning to one of these examples have a look at the clip below.

If you watch the clip repeatedly and very carefully it becomes clear that unsurprisingly the tongue plays a central role in speech production. Some of the actions that are seen are

6. Move tongue to soft palate to close off nasopharynx

Whilst this is going on there are two other things happening

1. The force of air expulsion from the lungs is being controlled by the muscles of respiration

2. The vocal cords are being relaxed and contracted whilst the lung air expulsion is vibrating the vocal cords

The combination of all of this results in speech. From the multiple steps above it seems entirely unlikely that conscious or at least potentially conscious activity (i.e. transient unconscious activity) is not playing a central role in the transition from one step to another of this process.

In other words it is highly unlikely that the brain sends a signal to the muscles associated with speech and then sits passively by while all of the actions above take place. It is most likely that the conscious/transient unconscious activity intervenes in each transition.

This means that the place for absolute unconscious activity takes a more peripheral role in speech. It becomes much less relevant and probably applies to the last few milliseconds of the signals moving from primary cortex to effector nerves.

If this is correct it would mean that this is recipricocity between streams of conscious speech commands and brief bursts of ‘reflexive’ automatic speech. This much is clear from the above thought experiment but it is also relevant to some of the theoretical knowledge about corticospinal pathways and also their relation to the Cerebellum which is closely involved in the monitoring of motor activities.

An Interpretation of Scientific Revolutions

Integration in Neuroscience: A Core Problem – Part 4: A Language for Mind and Brain?

Integration in Neuroscience: A Core Problem – Part 6: Reflection on the Three Structure Model

Integration in Neuroscience: A Core Problem – Part 7: The Unconscious in the Three Structure Model