The Origins of Art? 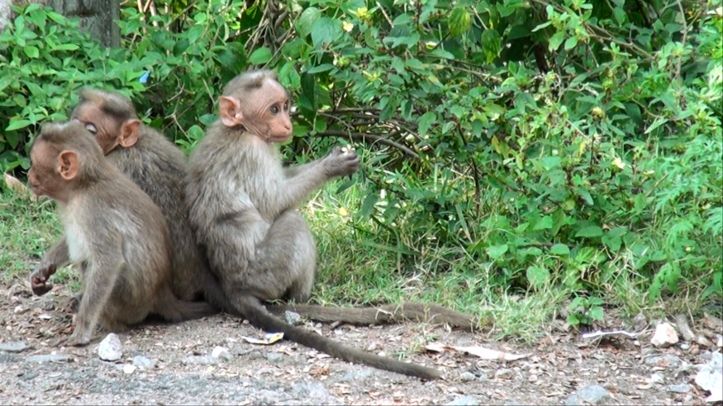 These were pictures I took in Kerala, India. The monkey (Bonnet Macaque) on the right stopped for a moment to examine a flower. Was it admiring the flower for its colour or aesthetic appeal? I don’t know but it soon left the flower.

Nature in all its variety is truly breathtaking.

Bees and others insects are attracted to flowers but they are pollinators. There is a purpose – a ‘symbiotic’ relationship between the bee and the flower – the scientific term for the harmony that can be seen in nature.

Is the monkey inadvertently behaving as a pollinator? Perhaps. What though is the function for the monkey? The appeal of flowers to people is well known and has led to entire fields of study and industries that span the globe.

Perhaps flowers have a universal appeal to species ranging from bees to humans. A combination of nectar and colours are powerfully attractive.

Conservation of Traits or Convergent Evolution

If this is more than a chance finding and represents a conserved trait then it might mean that monkeys and others primates could get enjoyment from seeing colourful flowers in their environment. Could it be a conserved trait? Monkeys and bee lineages diverged in the very distant past – conserved traits would need to be fulfilling another role. Distinguishing plants can be useful in anticipating when food sources will be available (e.g. see this piece which looks at the remarkable abilities of Chimpanzees to memorise their local environment). An important point to remember is that our ancestors diverged from Old World Monkeys about 40 million years ago but in that time both lineages have continued to adapt and evolve features that may not have been there at the point of divergence.

Co-optation – the Elephant in the Room

Co-optation occurs when an organisms adapts to the environment and that adaptation also fulfils a secondary role which is not essential to the survival of that adaptation. Perhaps co-optations have played an important role in our more abstract pursuits. Humans have the ability to generate artificial environments which shape further adaptations. Co-optations might shape such environments.

Art – Is this a Co-optation or an adaptation or something else?

Maybe the Bonnet Macaque’s actions were a chance occurrence with no significance. If they represent a trait then it might be a universal conserved trait meaning it would still be present regardless of which (evolutionary) route we had taken. Or maybe it serves some other purpose such as being able to identify foods in the environment*.

Why the Observations Above Aren’t Really Science

Science involves research which usually means having a model to begin with, altering at least two variables in an experimental paradigm and publishing the findings in a peer-reviewed platform. Science can be a bit more messy than this however. So anyway – take the above photographs and speculation with a pinch of salt. We can’t even begin to answer these questions without more rigorous approaches to the hypothesis. What this is though is something a bit more rudimentary. It still has validity as a ‘prescience’ – there is some evidence and it helps to generate a hypothesis.

You could generate an experiment to test this hypothesis. It would go something like this. Go to the primates natural habitat and place some colour neutral (e.g. green if surrounded by grass) flower like objects in one part of that environment. Then see how much time the primate spends either in that part of the environment or looking at that part of the environment. Then replace the colour-neutral flower like objects with actual flowers and then with colourful non-flower like objects. Comparing the times would help to test the underlying hypothesis. By altering the properties of the objects further characteristics of this behaviour could be identified if such a trait existed.

If such traits existed and were applicable to art it might mean that certain types of art had more popular appeal than others. Such works might be those that better approximated the natural environment. Even within the natural environment we might see that there is a hierarchy of popularity e.g. roses and tulips.

Are There Other Possible Implications?

There is a much older debate about urban and rural living. Beard’s conceptualisation of Neurasthenia had its roots in reflections about urban living. Debates continue about the optimum environments for health and illness and the balance with nature.

Index: There are indices for the TAWOP site here and here Twitter: You can follow ‘The Amazing World of Psychiatry’ Twitter by clicking on this link. Podcast: You can listen to this post on Odiogo by clicking on this link (there may be a small delay between publishing of the blog article and the availability of the podcast). It is available for a limited period. TAWOP Channel: You can follow the TAWOP Channel on YouTube by clicking on this link. Responses: If you have any comments, you can leave them below or alternatively e-mail justinmarley17@yahoo.co.uk. Disclaimer: The comments made here represent the opinions of the author and do not represent the profession or any body/organisation. The comments made here are not meant as a source of medical advice and those seeking medical advice are advised to consult with their own doctor. The author is not responsible for the contents of any external sites that are linked to in this blog. Conflicts of Interest: For potential conflicts of interest please see the About section.