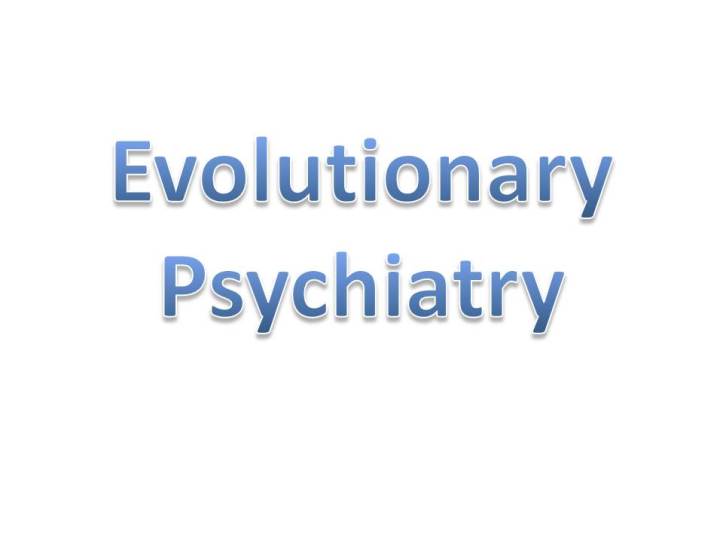 As readers of this blog will know, i’ve been very interested in Evolutionary Psychiatry as a subject which is potentially helpful in answering difficult questions about mental illness. In terms of trying to explain mental illnesses there is a circularity which is best summed up with nature versus nurture arguments. One person will suggest that an illness results from genetics whilst another will say that it results from the effects of the environment. Another group will opt for a bit of both. Some scientists get excited when new ideas such as epigenetics promise a neatly packaged answer to these complex issues. The field of Evolutionary Psychiatry is relatively new and follows on from Evolutionary Psychology. Psychiatrists such as Professor Tim Crowe have however suggested evolutionary explanations of Schizophrenia many decades ago. Such explanations have nevertheless remained relatively isolated in the context of the extensive number of mental illnesses described in the Diagnostic Manuals. In this sense it is still possible to say that Evolutionary Psychiatry is a relatively recent development.

The Psychiatrist Professor Martin Brüne has written an interesting book on the subject (see Appendix) although there still remains a lot of work to do in making this subject relevant to Clinical Psychiatry. I would anticipate that probably the best way that Evolutionary Psychiatry could inform clinical practice is through the development of models which can be tested. Such models backed up with supporting evidence at the population or sample population level I think would provide the starting point for further discussion. There are a number of Psychiatrists publishing in this area and Evolutionary Psychiatry is therefore beginning to develop a firmer foundation.

In this broader context I have detailed several problem areas in Evolutionary Psychiatry which will need to be considered in the development of a theoretical framework and unfortunately some of the circular arguments above still apply but at least there is one more theoretical tool to be applied.

#1 The Development of a Suitable Language. Psychiatry traverses many domains ranging from the functions of genes through to the effects of an illness on social functioning. Each of these areas requires a different level of explanation and even a different research paradigm. The language of Evolutionary Psychiatry has to have validity at each of these levels and be able to meaningfully navigate between each of these explanatory levels.

#2 The Problem of Neuroanatomy. Neuroanatomical problems of localisation are well recognised. Is there a part of the brain where a particular function is located? In parallel with nature versus nurture arguments, arguments in the field of neurophysiology/neuroanatomy centre around serial versus parallel processing. In other words a function in the brain can either result from a localisation of that function within one area in a hierarchical fashion or in several areas operating in parallel. Regardless of the source of evidence, disentangling these possibilities has been extremely difficult. With the most complex functions this becomes extremely difficult.

#5 The Definition of Illness. How an illness is defined is a complex subject area that reflects a consideration of the available evidence by experts. Such definitions represent judgements of the evidence in the context of extreme complexity as the above discussion illustrates.

#6 The Limits of Biological Explanation. In order to discuss what effect the gene or genes are having there has to be clarity on the constraints of the biological explanation. This assumes that the gene associations have been identified. The following debate at Yale illustrates many of the difficult issues around evolutionary explanations of behaviour (although we need to also explain inner experiences).

In particular, the question at 55.08 and the responses are well worth listening to.

#7 The Adaptive Value of a Single Gene. In the mathematical analysis of evolutionary concepts there are simple systems with well understood traits that have single gene mechanisms. Take Mendel’s analysis of plant hybridisation as an example. However if there is an argument about the adaptive value of a single gene in humans how can we be sure that the advantages or disadvantages of a single gene are not being masked by all of the other genes in the genome? In other words before we start analysing the effects of gene transmission can we be certain that the single gene contributes to adaptation to the environment? So long as the gene can be transmitted to the next generation it has demonstrated fitness in that generation. Nevertheless so have a large number of other genes. Indeed there are several mental illnesses where we can be confident that genes have a small effect size and that more than one is involved.

#8 The Changing Environment. Since our evolution from the earliest life forms has taken over 2 billion years the environment has undergone remarkable changes. Without question we have lost the opportunity to ask what the environment was which prompted the success of a certain trait and the associated gene or genes in a great many cases. In practical terms this perhaps limits the more certain discussions to cases which are well documented.

#9 The Level of Explanation at Which We are Satisfied. How sophisticated do we want our explanations? Take Circadian Rhythms for instance and their relation to the importance of the sleep-wake cycle and sleep disorders. There is already a large body of research into Circadian Rhythms from the simplest to the most complex organisms with well characterised cellular pathways. Will explanations of the adaptive advantage of certain genes early in the evolutionary timeline suffice as explanations for why certain sleep disorders persist?

#10 The Persistence of Adaptation. Also relevant to #9 all organisms continue to adapt to their environment. Therefore it is not only the environment but our own genomes that have changed significantly over time. Since we cannot go back in time and observe these adaptations we are dependent on the available historical data as well as indirect evidence from experimental evidence in organisms that resemble those in our early timeline.

As a result of these #10 problems, there are some principles which are worth considering in an Evolutionary Psychiatry framework.

#1 The Development of a Vocabulary for Evolutionary Psychiatry. The field will require a vocabulary of terms which are relevant to the different levels of analysis. This should be relatively easy to begin with because such vocabularies have already been developed within the different research paradigms. However members of those research communities should be involved in validating the terms with appropriate mechanisms for review.

#2 The Development of a Grammar Suitable for Traversing Explanatory frameworks. The grammar referred to here is not the basic grammar of the English Language but the rules governing the use of terms from different paradimgs. In order to construct explanations that begin with genetics and end with social functioning we have to be very clear that in moving from one to the other we have the appropriate evidence base to support such transitions. This will necessitate a consideration of many examples of such transition including representatives from different research paradigms.

#3 The Establishment of a Hierarchy of Explanations. In just the same way as the Cochrane Foundation has established a hierarchy of evidence to support the use of different forms of clinical treatment, we should be no less rigorous in our description of the explanatory models we are using. By using very limited explanations of the success of certain genes which are well characterised and supported we can assign them a high degree of confidence. By considering factors such as the effect size of genes, the effect of learning and response to treatment, the confidence we have of the biological contribution to the illness we can begin to build an estimate of the confidence we can have in a limited but predictive model. These models can inform experiments.

#4 The Establishment of a Biological Index for an Illness. We can use some of the factors mentioned in principle #3 to establish a biological index for an illness. This is the likely contribution that biology has to the illness. The index can be as simple as a range from 0 to 100. There is already a great deal of data on the heritability of certain illness particularly from twin studies. However this is not exactly the same as the biological contribution to an illness since non-heritable biological contributions are also possible. For example spontaneous mutations or acquired brain injury.

#5 The Establishment of a Reliability Index for Illnesses. Operational definitions are field tested to ascertain reliability data. In addition further work is carried out to characterise this reliability data in clinical rather than research settings. An accessible reliability index will inform the most productive areas of research.

No doubt there are other principles which may better serve the goal of addressing these problems but with time such an approach would help to bridge the gap between theoretical discussions of Evolutionary Psychiatry and the clinical applications which may accelerate progress within this field.

Evolutionary Psychiatry Resources on this Site