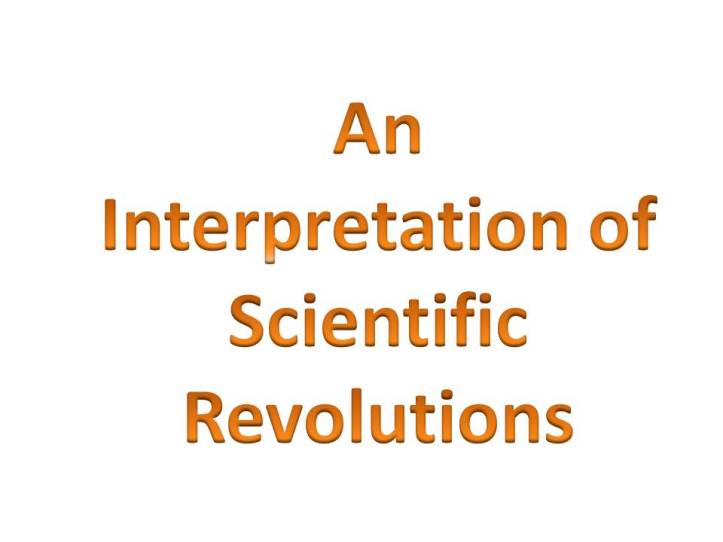 The following is an attempt to interpret Thomas Kuhn’s ‘The Structure of Scientific Revolutions’ using the framework of a discipline which is eclectic, pragmatic and empirical in approach. The starting point of this interpretation is a review of ‘The Structure of Scientific Revolutions’ which the reader will find via the link in the Appendix. This sixth part is a response to Chapter 5 of Thomas Kuhn’s ‘The Structure of Scientific Revolutions’. Chapter 5 was reviewed in another post (see Appendix). A theme that Kuhn explored in this chapter was the dissociation of individual research from the surrounding paradigm. One possible way of thinking about this is that there is a common understanding in the community that the paradigm is useful and that there is no further need to think about it. The scientist is left to focus on the problems within that paradigm. One interpretation therefore is that the scientific community have implemented an efficient and abstract way of working together. The scientists within a scientific community  operate within different geographical locations and cultures but are connected through a globalised scientific culture which characterises their community. The boundaries of this culture have been explicitly stated in the form of the paradigm. The community has solved the problem of how people can work together efficiently. The rules have been worked out in an abstract form. The acceptance of papers in a peer reviewed journal by the peer group of the scientist can be seen as a tacit acknowledgement that their work fits into the paradigm.

The methodology that forms part of the ‘normal science’ is a well characterised set of behaviours that the scientist must engage in to replicate the conditions that have been established elsewhere. The outside observer may well draw parallels with ritualistic behaviour. However as a result of this ‘ritualised’ behaviour, the scientist is able to produce and document results which can be compared with the results of other studies. In this manner an evolution of knowledge occurs whereas elsewhere ritualistic behaviour although integral to group identity can be associated with invariance in order to maintain the group identity. Furthermore scientists can apply their knowledge in the form of technology. When the science relates accurately to the real world, the technology can enable the users of that technology to better adapt to their environment. Changes in technology can lead to a refinement of the methodological ‘rituals’ in a goal directed manner. This process is accelerated by competition and science is defined by change. Whether this is progress has been discussed elsewhere by Kuhn but the argument is altogether different when we talk about technology which however is outside the scope of the present discussion.

If we frame the discussion in this way it leads inexorably to another question. If one of the characteristics of science is to increase the collaborative efficiency of the global community of scientists, can that efficiency be increased further? If there is a process of doing science that is common to all branches of science then can that process be refined? If this is common to all of the branches of science then a better understanding of this would facilitate the creation of a common language for all scientists which can be refined by a concerted approach by all scientists. This may seem a rather vague comment but can be clarified by means of concrete examples. Aggregating data and knowledge from previous studies enables scientists to better formulate new studies by asking key questions or by generating new hypotheses on the basis of this aggregation. The scientists operating within branches of science as disparate as materials sciences and psychopharmacology use electronic databases of stored scientific papers in order to aggregate these papers. Indeed many software programs have been developed to facilitate this. Improving this process and investigating the most efficient workflows for scientists across all branches of science would enable scientists to improve their efficiency and do so by pooling their resources. In a sense this is a metascience with the potential to accelerate progress within fields. This metascience would include a branch of the social sciences in order to better understand the factors that influence scientific output (there is work on this already including that on citation indices).

Chapter 5 in Thomas Kuhn’s ‘The Structure of Scientific Revolutions’ is titled ‘The Priority of Paradigms’. In this essay as he refers to it, Kuhn elaborates on the relationship between rules, paradigms and ‘normal science’. I thought this essay was less articulate than the previous essays although he introduces some important concepts which he develops in later chapters. Kuhn suggests that rules govern a research tradition and that there is a common understanding within the research community that forms the research paradigm. However he thinks that scientists are often unaware of the specifics of the research paradigm and instead rely on an intuitive understanding much akin to that proposed by Wittgenstein. Wittgenstein proposed that we know a game by its family of properties. Even if a game doesn’t have all of the properties we identify with a game, we will still be able to recognise it as such through these flexible recognition mechanisms. He goes on to describe science as a ‘ramshackle structure’ with little coherence arguing that if we consider the physical sciences we will see a big difference between related sciences. He gives the example of a chemist and a physicist being asked whether helium is a molecule and giving two entirely different answers. The explanation for this is that the scientists were using different paradigms even though both branches were derived using quantum mechanics.

I found many of Kuhn’s suggestions profound. He suggests for instance that the scientist may undertake research quite separately from any explicit consideration of the underlying paradigm. This thought is quite remarkable as it suggests that a scientist may dissociate a rational approach used in their experimental study from an irrational approach to the wider context of the research paradigm in which their study is operating. In other words if there is an obvious flaw in the underlying assumptions of a research paradigm then it doesn’t matter how many well designed studies are undertaken within that paradigm, the conclusions will still be erroneous because of the mistaken assumptions several layers down. Kuhn would presumably have recommended a healthy scepticism towards the research paradigm although this is not explicitly mentioned within the essay. I can’t help but think that in describing the research paradigm, Kuhn is actually describing in a roundabout way, the characteristics of a social group. These characteristics remain invariant regardless of whether it is science we are talking about or any group activity. The group will form an identity and this identity is developed through a shared language and culture.  The culture itself may develop from a decision to solve specific problems whereupon there is a ccncerted drive to use a systematic approach to achieve this end. In science this results in the research paradigm. However this will also be repeated in other parts of society forming the impetus for social change across a wide variety of fields.