The Most Important 21 Pages In The Field of Neuroscience? Dr Korbinian Brodmann. The Man Who Mapped the Brain. Part 6 – The Occipital Region

Dr Korbinian Brodmann was a neuroanatomist who revolutionised the study of the brain by generating carefully constructed brain maps of humans (see Figure 2) and other species. In the process he compared the brains of these different species and identified specific regions according to their microscopic properties. Brodmann’s maps are still used by clinicians and neuroscientists serving as a testament to the validity of his research. The book was originally published in 1908 in German and has subsequently been translated into English (See Appendix).

Brodmann’s treatment of the human brain is essentially covered in 21 pages of the translated text with Brodmann systematically discussing the neuroanatomical features of the different regions along with the Brodmann Areas found within those regions. The fifth region that Brodmann describes is the Occipital region. Brodmann allocates three Brodmann Areas (BA) to this region

Figure 2 – Cytoarchitectonics of human brain according to Brodmann (1909), Public Domain*, The Top Diagram is the Lateral Surface of the Cortex, The Bottom Diagram is the Medial Surface 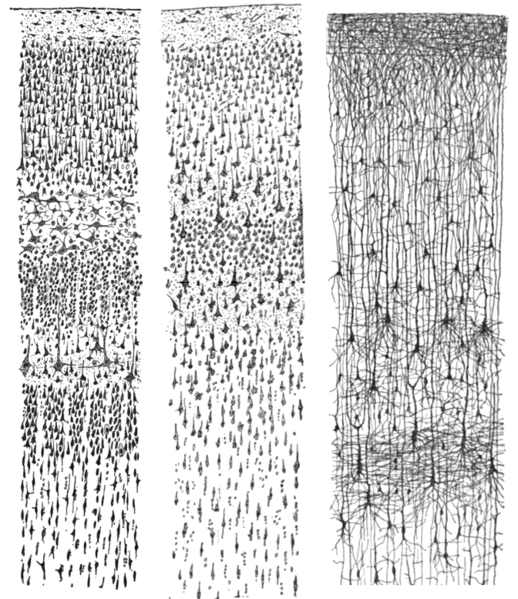 Figure 3 – Three drawings by Santiago Ramon y Cajal, taken from the book “Comparative study of the sensory areas of the human cortex”, pages 314, 361, and 363, Public Domain*

The Occipital Region like many other regions of the brain has been intensively studied. Researchers have built up a very sophisticated understanding of the functioning of this region (e.g see here).

Turning first to BA17 – the Calcarine Cortex, Brodmann says that BA17’s visual appearance is distinct and visible even to the naked eye. The bulk of BA17 according to Brodmann’s description is found on the medial cortex. He begins by describing the relationship of BA17 to the Calcarine Sulcus. On the medial side it extends quite significantly and although covering an area which includes the Lingual and Calcarine Sulci he notes considerable interindividual variation. The dorsal Striate area is defined by the combining of the Parieto-Occipital and Calcarine Sulci where the dorsal Striate area follows the deeper parts of the sulcus. On the lateral aspect of the cortex, BA17 is described as extending minimally again with individual variation.

Next Brodmann provides a brief description of BA18 – the Occipital Area.  According to Brodmann, this area forms a ring-like encirclement of the Striate Cortex. However medially it is sufficiently narrow to make identification difficult. On the lateral cortical surface it is wider and extends along the Lateral Occipital Sulcus (in brackets referred to as superior and presumably meaning superior to this sulcus).

Finally Brodmann describes BA19 – the Preoccipital Area. Brodmann’s description is similar to that of BA18. Again it surrounds BA18 in a ring-like formation. Again it is difficult to identify on the medial surface. Again it extends over a wide area on the lateral cortical surface.

Brodmann also discusses some subtle differences between his findings and those of neuroscientists A Campbell and Elliot Smith. In the text he also refers to his previous publications which elaborate on the neuroanatomical details above.